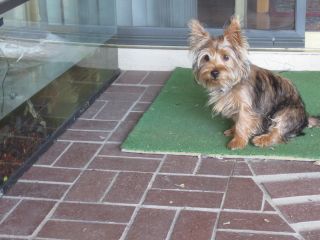 We have tons of great Rusty pics. Don’t mean to swamp you with Rusty images, but such a pic brings a quick smile. So, I send these pics around to my family, friends.

He looks like so many of your prior Carkies. Generally wet, and in motion, acrobatically running over a downed tree. Or plunging into any water: streams, ponds, sprinklers. He likes water. When we walk downtown, he gets stopped by all the Yorkie ladies and by the Cairn owners who need to discuss his attributes. He gets compliments for being able to sit and wait at outdoor restaurants. Good practice.He knows I have something in my pocket for him later. Good company around the house, though he is sure that cats are evil intruders who need a growl and some barking. Caught a Robin the other day. The bird had flown into a glass window, bounced down to the patio and was hopping around a bit loopy. Rusty saw his chance and pounced, but released him when commanded, “RUSTY, DROP!” He was left with a forlorned mouthful of feathers, and the bird recuperated and incredibly flew off later. Quite a disappointment for R, but now he is pretty sure he can catch anything.