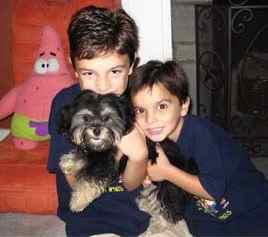 Oh my gosh! We love this little guy so much. He came out of his crate in the car and sat in my daughter’s lap all the way home. He pooped outside when he got home and then he played a little. I gave him that stuff in the baggie – three shot worths and he fell asleep- slept a long time. He just got up and played and went out and pooped again- then played himself out. I just intervened after about an hour of play and put him in a little puppy yard I have off the kitchen with a cozy crate and his food and water. He ate a little and settled down quickly. He is now sleeping. The kids would have played with him all night but I could see signs of him tiring out.

My Lillian (their other dog) was shocked when she saw him. She acts like she does not see him but she sits outside his little play yard in the next room focused on it- silently watching. She let him play with her tail and was polite. I am sure she is a little jealous- but that is okay. She will get over it.

We named him Casper. Casper is the most lovely little puppy! He has a gentle manner and is so darn cute. I promise to take good care of him. I am taking him to the vet on Tuesday. They are expecting us and excited to meet him.

My daughter said this as she was holding him ” Mom, whoever raised him really took care of him- he is so well adjusted and easy to hold- it’s hard to believe he was in the crate that long and was so relaxed when he got here!” . This is true. I think you guys really have a gem of a business and the parents you picked are also gems. YOu prepared him really well. I think it paid off and made his transition much smoother.

Thank you for all you did to get him here. I promise we will love him forever.

I am not leaving him alone in his crate- I am bringing him up in a crate right next to my bed tonight so I can put my hand down and he can feel close to me. If he cries I will take him out to do his business and run around and bring him back up to sleep. I hope his first night goes well. He is a great little pup.

He is in a crate next to me right now and was crying but I put my fingers in his crate and he settled down. Poor boy he must miss you all so bad. My dog lilly is next to me on the other side. I love this pup so much. Please do put this on your page.

BTW I took him outside today every time he woke up or ate. I waited for him to do his business and praised him when he did. He is really gonna be easy to train. I think he just fell asleep.

You know, you really have made good decisions about parents and I feel so lucky I found you. Thanks again. I will update you on Casper’s progress.

I just want you to know Casper is doing well. He starts his puppy classes this evening! I look forward to that. He is so smart and so sweet! Lilly our other dog is starting to warm up to him and they do play. He has not gotten me up in the night one time since he has been here, he has not had any accidents in our house except for two times he peed when I forgot to put him in his crate and left him instead in his little puppy play yard in our house. This was due to us and he was barking to go out!. He is extremely smart and so lovable.

I just wanted you to know what a lovely dog he is and how lucky we are to have gotten him. He is eating great, he is drinking fine, and happy as ever in the morning and playful all day long!